The age-old notion that there is something unsavory about being left-handed derives from the word’s very etymology—from the Latin sinister, for “left.” While enrolled in a disability studies certificate at CUNY School of Professional Studies, researching for what would become Left and Right (2020), the composer and musician Molly Joyce absorbed a striking fact: the left side’s reputation as evil, weak or otherwise less than its counterpart is in fact common across time and space. Joyce had known of some historical grounds for this conception. But the cultural continuity, she said, “was definitely pretty surprising.”

In Left and Right, first produced as a film last April, Joyce joins forces with dancer and choreographer Jerron Herman; Max Greyson, a poet, spoken-word performer, and theater-maker who serves here as a writer and audio describer; and director Austin Regan for a hybrid performance that examines how we relate to mythologies of the supposedly nefarious left. Supported by Joyce’s Virginia B. Toulmin Fellowship, presented by National Sawdust and NYU’s Center for Ballet and Arts, and YoungArts, the project made its way to Sawdust in-person this June, offering a formative opportunity to translate the collaborators’ work from screen to stage.

Accessibility, often an adjacent concern or afterthought in artistic planning, is at the core of Left and Right. Both Joyce and Herman have disabilities—Joyce’s left hand was impaired in a car accident at the age of 7, and Herman was diagnosed with cerebral palsy at three months. By imagining from the start how American Sign Language (ASL), captions, and audio describing for blind or visually impaired people could work in tandem with music and dance within a single production, Joyce and her team planned to realize an “aesthetics of access” regarding how accessibility might be woven into a work’s design. To that end, the team also included Brandon Kazen-Maddox, a hearing ASL interpreter, and Shelly Guy, a Deaf ASL interpreter, as well as Sandy Guttman, a curator and accessibility consultant. In both the video and the live show, the team crafted layered, interlocking, and often simultaneously presented points of access—captions, live performance by Joyce, Greyson, and Herman, with audio descriptions by Greyson; and Guy and Kazen-Maddox’s translations—to tell the story of Left and Right. 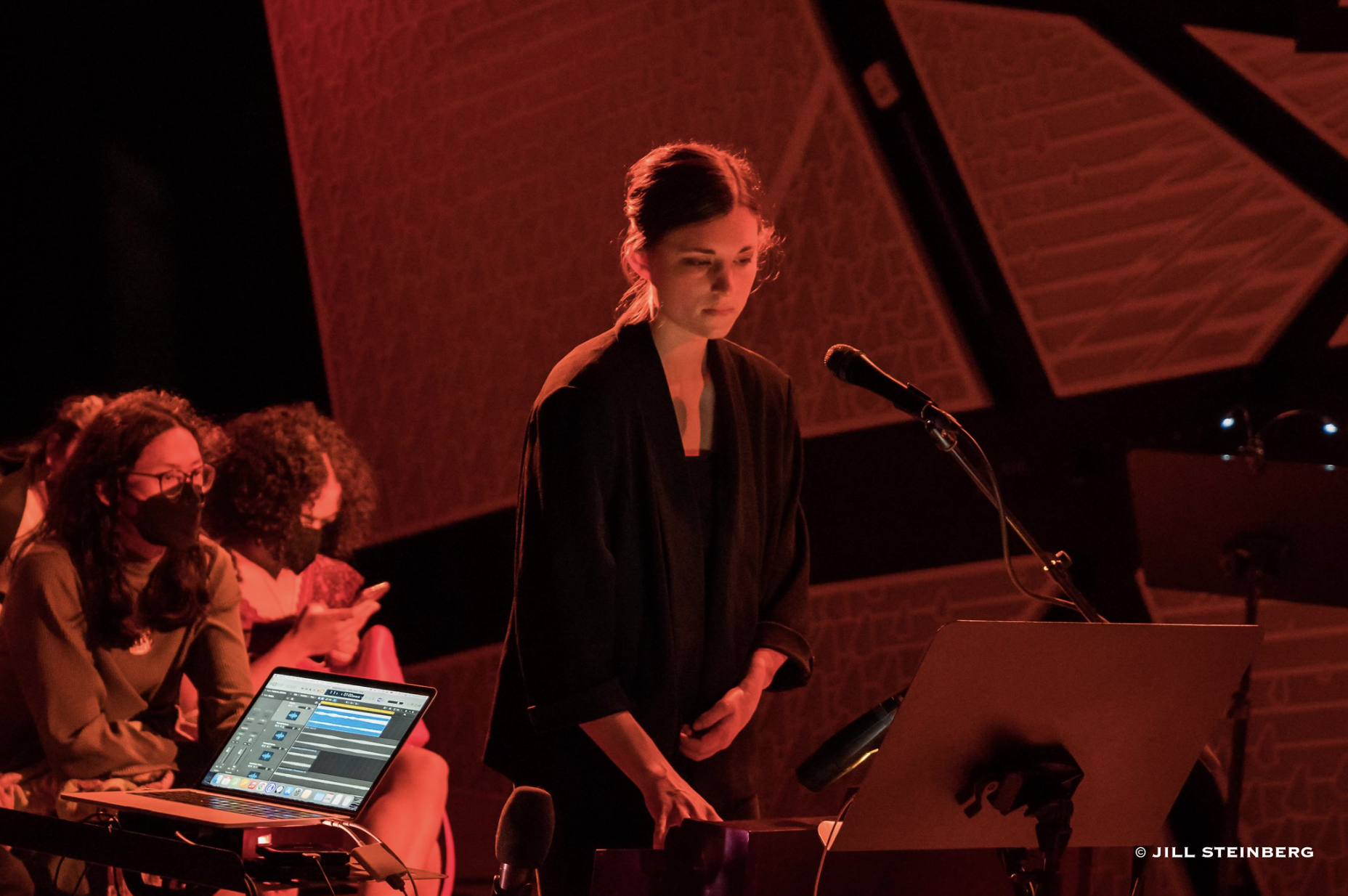 “It was definitely really gratifying [to] prioritize [accessibility] from the start, to really integrate it as an essential artistic element. I feel like we’re often so conditioned to view accessibility as not aurally pleasing or visually pleasing, like this tack-on, and I loved trying to push against that."

Though the process of balancing so many parts entailed a significant learning curve, Joyce and the team embraced the difficulty. “It was definitely really gratifying [to] prioritize [accessibility] from the start, to really integrate it as an essential artistic element,” Joyce said. “I feel like we’re often so conditioned to view accessibility as not aurally pleasing or visually pleasing, like this tack-on, and I loved trying to push against that.”

Each of the production’s three sections is characterized by what Herman described as a creative game of “Telephone,” in which a different discipline—music, dance, or text—leads the action. “I’d worked with dancers, but it’s always on the composer to make the score…the dance [comes] first, then the music,” Joyce reflected. The decision to rotate primacy, the team said, allowed performers to explore multiple relationships to Herman’s movements, Joyce’s score, and Greyson’s writing. As their layered mode of working developed, the process came to resemble, for Regan, “one of those time-lapse videos of a plant growing, where you don’t know quite what it’s going to be,” he said. “That’s both the frustration and the thrill.”

In translating Left and Right to the stage, the team has allowed the boundaries of those roles to blur. As choreographer, Herman coached the other typically stationary performers in movements that will be unique to the live show. “I’m in such a great position, as a mover with a disability, to really subvert how movement should be or qualify for a certain body or occupation, and to get to expand or extend who can move,” Herman said. “I’m finding really exciting relationships [by] including folks who are otherwise employed.” Greyson, whose presence in the original was as a voiceover narrator, now became, as he wrote in an email, a physical “character”; Herman played on Joyce’s instrument; and Joyce, in addition to singing and playing, moved about the stage. “[Herman] really pushed me in the best way to be freer with my body and not worry about perfection,” Joyce reflected.

While the live version also incorporated the video, Herman said the team now also enjoyed the advantages of National Sawdust’s “flex” space, which can be configured to different needs. Unlike in traditional staging, where audience members face the performers in front, attendees at Left and Right were seated in two sections split by a tape line in blue—the color of disability signage—and slightly faced one another, such that they might occasionally meet the eye of an opposing attendee. Among Joyce’s inspirations were Mesopotamian depictions of the “bucket and cone,” held in a figure’s left and right hands; the cone, dipped into the bucket, was referred to as a “purifier” in religious ceremonies. In the live version, the performers gesture towards this ritual by interacting with a bucket and fabrics. At the conclusion of the show, the collaborators also engaged the audience via a series of polling questions that attendees can answer on their phones.

The live production constituted a sort of reunion: Joyce had previously worked with Herman on several projects and was initially inspired to explore the project after Herman mentioned an interest in exploring the myths surrounding left and right, and Regan and Joyce had collaborated during Joyce’s undergrad days. Greyson, meanwhile, joined the project in late 2020 after being connected remotely with Joyce through research at the Antwerp Royal Conservatoire. Joining together to realize the project outside the initial confines of the pandemic, the team agreed, has opened new possibilities for their work, both together and individually. Said Regan, “there’s something cool about not having to shut down your instincts and say no to anyone’s creative vision. [...] It doesn’t have to just be one thing. It can be multiple things.”

Jennifer Gersten is a writer and violinist from Queens, New York pursuing a DMA in violin performance at Stony Brook University. Her work appears in The New Yorker, Rolling Stone, and The Washington Post.

These articles were made possible by the Rubin Institute for Music Criticism at San Francisco Conservatory of Music and the Ann and Gordon Getty Foundation.